skip to main | skip to sidebar

Let's Do It Again! 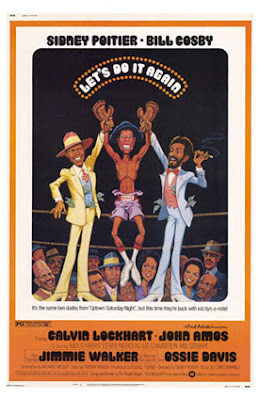 The start of President Obama's third year is barely under way and he is off doing what he has done for the first two years; and that is campaigning. He is hoping that we will forget that the country is still mired in a recession, that unemployment is still hovering around 9% and that he has committed to spend more of your tax dollars than any other President in U.S. history. And like his predecessor he now owns the title of high gasoline prices (albeit neither President can control oil prices thus the price of gasoline).

He wants to tout his accomplishments: "Because of your help...we yanked this economy out of what could have been a Great Depression. We passed the historic health care bill. We ended don't ask don't tell." And he is calling all of this his accomplishments.

It's obvious that the President has been watching old 1970's movies like the Bill Cosby, Sidney Poitier film "Let's Do It Again." A movie where Clyde Williams (Poitier) and Billy Foster (Cosby), in an effort to raise money for their social organization travel to New Orleans and hypnotize Bootney Farnsworth (Jimmy "J.J." Walker) into becoming an over confident fighting machine and he ultimately wins a boxing match that they had bet against the odds and won a big return. And when they return to Atlanta a group of hoods who lost money on that fight want them to rig another fight so that they can win their money back.

Now the President wants to tout his accomplishments and hypnotize us into believing that 9% unemployment is the new norm. That spending close to 1 trillion tax dollars to ensure that every American will have health coverage, whether they want it or not, is alright. And now because gay and lesbian service men can openly serve will somehow cause terrorist to stop wanting to kill us. All I can say to this is oooooh the horror!

It's funny to see that Obama has abandoned his other "successes" such as successfully taking over two thirds of the American automobile industry. Another success in getting his henchmen Nancy Pelosi and Harry Reid to pass the biggest porkulus spending bill in history that did not lower unemployment and did nothing to keep the economy from tanking even further. How he successfully flew to foreign nation after foreign nation apologizing for our decades of economic and social successes.

I guess the President has been hypnotized because he forgot that he went against the will of the people and that we do not deserve another four years of his kind of successes. Will we be able to survive should this country make the same "Let's Do It Again" mistake and allow this President to serve again? Are you better off than you were three years ago?

Just remember that elections have consequences and this is ours. Now let's see if we can get it right this time. Choose your candidates carefully.

Gorgeous dress and lovely fabric choice! Don't be sad about ผลบอล moving to London, think of all the lovely vintage social events you ผลบอลสด can go to. Also London has great fabric shops!

Why I Do This

Ron B
We have become a nation of celebrity worshipers and followers. Americans no longer want to take responsibility for their actions nor do they want to recognize how their actions may have contributed to what has happened in their lives. I know that hard times come but through faith and through the Love of Jesus Christ they will not endure. Learn to laugh. Learn to live. But above all refuse to lose. This nation is great because of who we are not because of government.